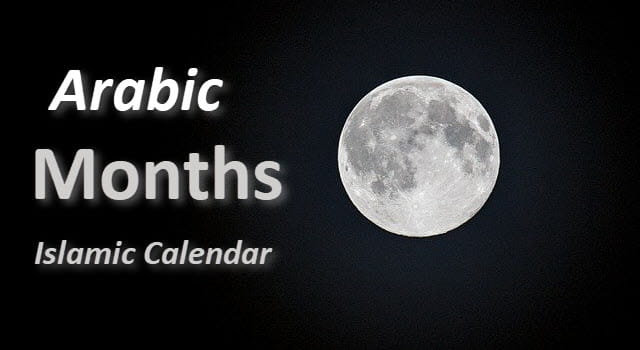 The Hijri Months of the Islamic calendar, which begin with Muharram and end with Dhul Hijjah, is divided into 12 parts. Each one has a significant meaning. The Arabic months is a calendar system that begins with the Prophet’s migration from Mecca to Medina and is centered on the moon’s orbit around the earth.

1. Moharram: In the Islamic world, the month of Moharram is defined as Sehrullahi’l-Moharram, which means “the month of Allah.” It is said that this is the month when wealth and prosperity increase. This month marks the beginning of the Hijri-Islamic New Year. The Hijri New Year starts on the first day of Muharram. On the tenth day of Muharram, the Day of Ashura is meant to celebrate.

2. Safar (Safar Ul Muzaffar): It is the second month of the Hijri calendar. It is also believed that the Meccans left the city in the month of Safer and embarked on a journey, hence the name. A few other Arabs, according to another rumor, regard it as a foreboding month.

3. Rabi Al Awwal: The Hijri calendar’s third month. In this month, Mawlid is celebrated. In Arabic, Rebi is also known as spring.

4. Rabi Al Akhar: It is the fourth month of the Islamic calendar.

6. Jumada Al Akhira: The sixth month of the Islamic calendar.

7. Rajab (Rajab Al Morrajjab): The Hijri calendar’s seventh month has arrived. It is the beginning of sacred three months in Islam religion. People start to get ready for Ramadan. This month, Muslims show reverence for one another and do not consider war to be halal.

8. Shaban: The Hijri calendar’s eighth month has arrived. It’s referred to as dispersion and separation. The tribes of those who would battle in the month of Shaban take their positions because they prohibit the war in the month of Rajab.

9. Ramadan: This month, the holy book, the Quran, began to be revealed according to Islam. This month marks the anniversary of the Night of Power or Decree (Laylat al-Qadr). Fasting is practiced during Ramadan, which is a significant month for Muslims and is known as the Sultan of the Eleven Months.

10. Shawwal: This month marks the end of Ramadan with the holiday of Eid.

11. Dhul-Qadah: It is referred to as the month of peace.

12. Dhul Hijjah: This month includes the feast of sacrifice (Eid al-Adha) It is the Hijri calendar’s final month. For Muslims, the first ten days of this month are extremely important. The Feast of Sacrifice is celebrated on the tenth day. This is also the month when the Hajj pilgrimage takes place.